I Ditched a Classic Business Graduate Path to Pursue Data Science. Here's Why

WHU graduate Marius Löwe turned down a place on a prestigious business-focused Master's program, and it was a decision that he doesn't regret. Find out how he approached this career-changing moment.

Armed with a bachelor’s degree in business administration and general management, and some experience from two startup internships, I started my gap year in Berlin with the goal of figuring out what master’s degree to pursue. At the end of the year, I was offered a place in a master’s program for Accounting, Financial Management and Control, but I turned it down. Instead, I extended my gap year and decided to take a different path. Now I’m studying data science in Lisbon and I couldn’t be happier with the choice I made.

Here are the key drivers that led me to the decision:

1. Learning a hard skill was important to me

With the exception of the area of finance, business administration seemed like a soft skill-oriented study program. Based on my internships, these soft skills were often applied in problem-solving or general knowledge cases. And I can only speak for myself, but this came relatively intuitively to me. I thought I progressed much faster in a working environment than a study environment when it came to improving and learning new soft skills. For this reason, I wanted a master’s that would foster hard skills. This meant going either into finance or something further away from business administration, such as computer science or statistics, for example.

2. Taking more time to decide was better than going down the wrong path

After my first gap year, I was accepted to a reputable master’s program in finance in a nice city. So far, so good. What more could I wish for? But in the end, I didn’t follow through on the offer. I realized that I didn’t see myself working in banking or finance (at least for now). Of course, I could have pursued a more general managerial role with a finance master’s but I knew I wouldn’t really enjoy this branch of study too much. So I took another job for a year to give myself more time to figure out what I really wanted in a master’s program.

3. Data science was my gateway to working with digital products

I really enjoy working with digital products, in some shape or form. However, the technical side of it was a large black box to me (and sort of still is). I decided against a master’s in computer science and to leave that black box fairly untouched. It wasn’t clear how much I could benefit from it if I decided to go back to a managerial position. Also, a master’s in this area wouldn’t get me anywhere. In data science, however, I would strengthen my analytical skills and learn about the possibilities and limitations of how to handle and extract information from data. Even if I would go back to a managerial role, this would be a very useful additional skill to possess, thus giving me two nice situations I could really see myself working in.

4. Picking the right university for my experience was crucial

Some data scientists are self-taught. There are amazing online courses that cover almost the entire content of my degree or more. However, as I knew very little about data science before getting into it, I was afraid I would miss out on important lessons. On top of that, it’s just not as much fun as going to university and tackling challenges with other students. While I was looking at various admission tests, it became very clear that some degrees require a computer science background. However, there are more and more business schools that offer data science degrees to students like me who don’t have a technically-focused bachelor’s.

This transition to data science is something I recommend to people with a similar background. To begin with, you’d already have a very good foundation. Furthermore, you can progress much faster without missing out on a lot in the beginning while trying to catch up with the code. It could also be a good choice for those not entirely sure which direction they’d like to go in as the master’s fosters technical and analytical understanding, which is extremely valuable in various professional contexts. Prior knowledge in coding or data science will give you an easier start as well as widen your university options. To those who don’t have prior knowledge, I’d recommend a thorough assessment of a program where no previous knowledge is assumed and maybe enrolling for an online coding course. 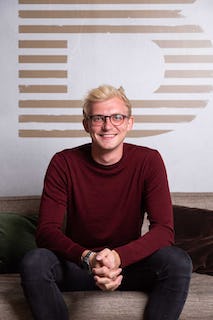 Marius is a 24 year old student from Hamburg. He’s currently pursuing his Master’s in Data Science at NOVA Information Management School in Lisbon. A two-time Berlin Talent Summit participant, Marius landed his internship and subsequent job at Axel Springer through the Talent Summit before moving to Lisbon.